As a way to make my trip to the North of Spain, León lighter, I decided to take a different route from the usual one. I went through La Mancha and Ávila and visited the Windmills Route.

These are the windmills that inspired Miguel de Cervantes to write the epic stories of                  El Quixote tilting at windmills.

I followed the footsteps of a knight who couldn’t distinguish fantasy from reality, who fought windmills instead of giants, who loved a sweet girl called Dulcinea.

A knight with a horse named Rocinante whose best friend Sancho rode a donkey. Don Quixote of La Mancha fought some windmills and now they are famous all over the world. 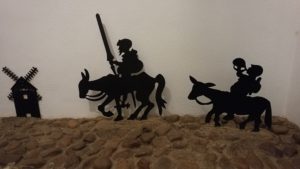 Until a few months ago, I did not even known the windmills were still standing. Even less, I imagined that the “Toboso,” Dulcinea’s village in the novel, was actually a real village in the middle of Spain, in La Mancha.

As romantic as I am, I started my trip in the Toboso, Dulcinea’s village. Dulcinea was the fictional character Quixote was in love with.

‘… her name is Dulcinea, her country El Toboso, a village of La Mancha, her rank must be at least that of a princess, since she is my queen and lady, and her beauty superhuman …’ 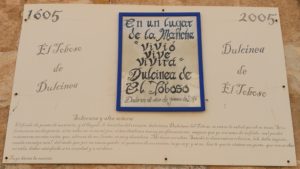 El Toboso exists and it is a traditional ‘manchega’ village  where the Dulcinea’s house is a museum. The tradition says that Ana Martínez Zarco de Morales was the owner of the house and the literary Dulcinea of Don Quijote.

I witnessed a never-ending story between Dulcinea and Quixote in the town square. 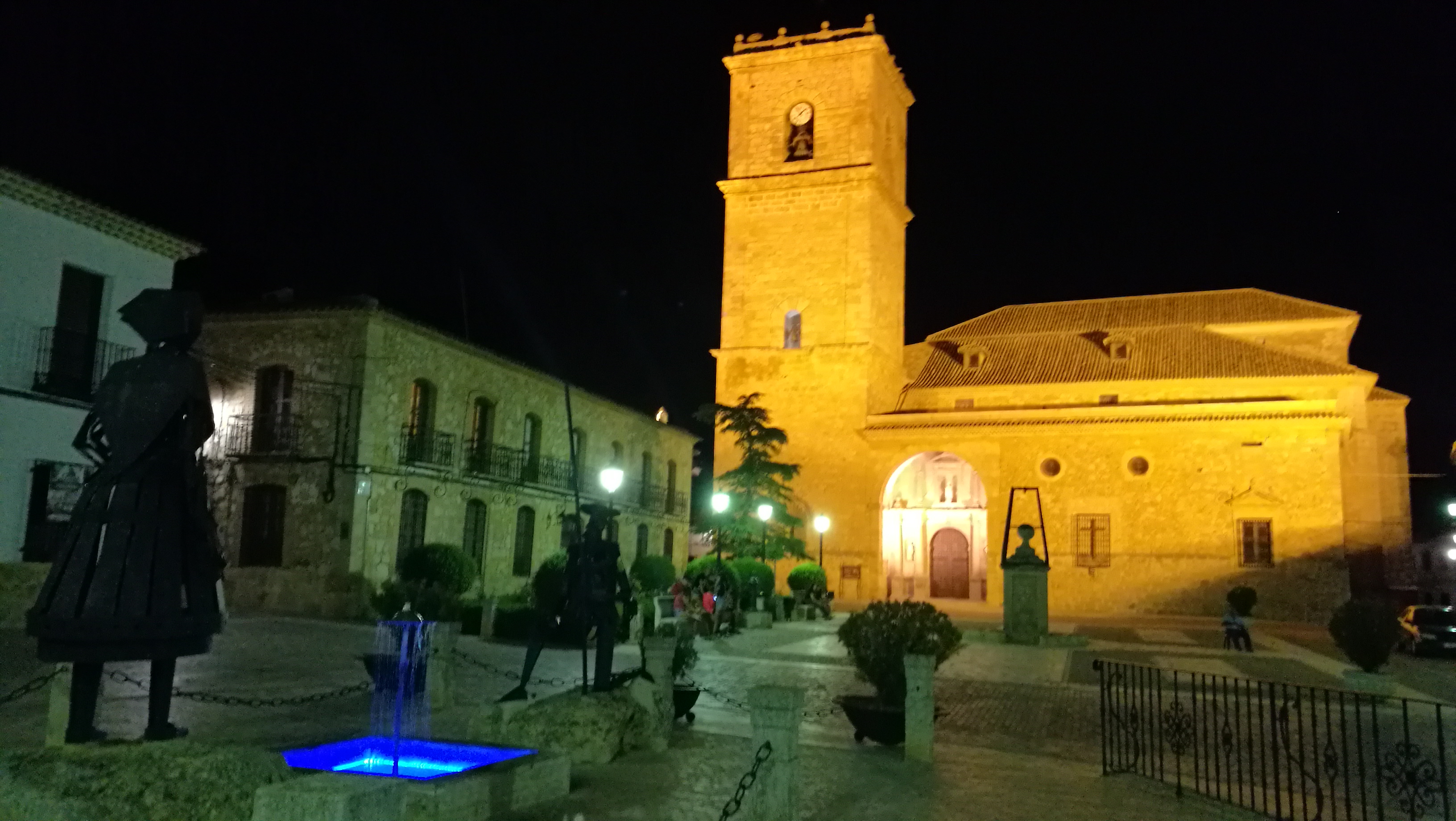 My stay in El Toboso was in a rural hotel, la Casa del Cómico, a very nice place and gentle hosts.

Next stop was the windmills of Mota del Cuervo, where, if you are lucky, you can see one of the windmills working if there is enough wind. Unfortunately, there was no wind when I was there. 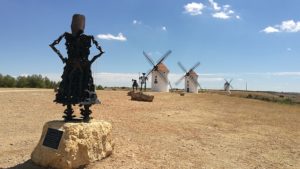 Campo de Criptana is the place where tradition says Cervantes was inspired to write the famous windmill scene. Wind and heat were present; La Mancha is a plateau in Spain and it is hot in summer.

After Campo de Criptana, my next stop was my peculiar hotel in Alcázar de San Juan.

My hotel, Convento de Santa Clara, was located within a restored convent, now a beautiful hotel with an excellent restaurant. Alcázar de San Juan is another traditional village of La Mancha with ancestral homes from the 17th-19th centuries and connected to the antique Spanish literature.

Consuegra, was my next stop and last place where I saw windmills. In Consuegra, the windmills are accompanied by a 12th-century castle and they are spiking the hill just outside town, giving a spectacular view.

Consuegra gets more tourists because it is easy to get from the nearby cities of Toledo and Madrid. You can visit some windmills and the castle. It is also a good place to buy local saffron.

In Consuegra, I finished the windmills route and headed north to Avila.

More information about this route.

There is a Spanish saying : Con la iglesia hemos topado.

This Spanish saying is falsely ascribed to Cervantes in Don Quijote, but it doesn’t appear like that in the novel. This is often used with a sense of criticism against the power of the Church. However, in the passage mentioned below Don Quijote is not talking about the Church as an institution but he refers to the village church (written in lower case), and he doesn’t say “Hemos topado, amigo Sancho” (that literally expresses a negative feeling against the power of the Church), but “Hemos dado, Sancho” (that means “We have arrived at the church, Sancho.”).

Anyway, this false quote has become cliché in Spanish. Sometimes it is used to refer to all sorts of things or institutions that exercise a power that is not easy to face.

Nevertheless Spanish people use to say “Con la iglesia hemos topado” without directly talking about the Church, but about something mentioned in the context.

This information about this saying has been found in the following website.

Soon: a post my discovery of the wall city (Ávila) and her spiritual citizen.