Chicago is called “the windy city,” but I was fortunate the second time I visited. There was no wind and I was prepared for the cold.

My first time in Chicago was in August a few years ago and, due to a hurricane, the weather changed and our summer clothes were not warm enough, so my first souvenir was a cardigan. This time, I was visiting for a two-day workshop organized by the publishing company Hay House.

The first major milestone of this project was in March when I bought a website domain.

In April, I struggled while setting up the website and the blog posts.

However,in May, this baby project started walking by itself.

I attended the Hay House writer’s workshop in Chicago for a weekend thanks to a long weekend holiday.

Why go there when I had the online course at home?

Because sometimes you need to test the waters.

The “click” is my way to say an idea appeared in my head.

Most of the time I don’t know where it comes from, but if after a few days doesn’t go away, I usually take action.

I had the “click” to buy the online course, but I was still had time to chicken out.

Now, seeing where this project could lead activates the control freak in me who needs to control the situation. Going to Chicago make it more real, with no turning back.

Going to the workshop was scary.

It meant this was becoming more and more serious.

The time in Chicago was short but great. The weather was cool but sunny. I stretched my four days there as much as I could. I went to the workshop, walked around the city, shopped and took so many pictures.

I loved the colors of Chicago at night.

Otherwise, I would be running in the opposite direction rather than writing my book proposal.

Fear vs a voice saying, “Girl, get your hands dirty!” 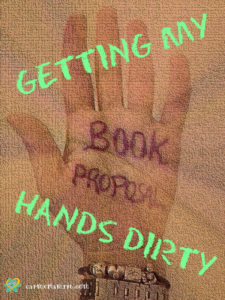